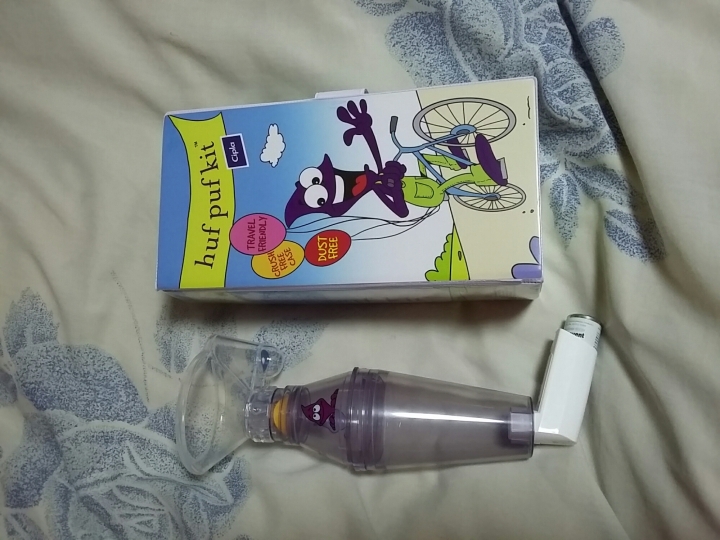 Check this out. Its a kiddies inhaler thingamajig. I’m not sure if this is new or not but it’s new to me.

My daughter has a bad reaction to Demazan and Venteze. By bad i mean she loses her shit. I wish I was exaggerating but I’m not. It’s like she’s on drugs. Her energy sky rockets and she’s almost literally bouncing off the walls. The first time she fell ill she was prescribed both of these. That first night we kept scolding her for jumping everywhere and screaming and just acting too hyper. Then we realised that she just wasn’t…right. It was as if she couldn’t stop herself from doing what she was doing. There were moments when she kept saying the same word over and over. It went from ‘why is she being so naughty?’to ‘is she going to be ok?’. She couldn’t sleep even though she was exhausted and we didn’t know what to do. She needed the meds. A quick Google search by my husband revealed that these meds can cause hyperactivity in some cases. Well, I can confirm that.

Anyway, the second time she got sick we went back to her old pead (who is super awesome but a further drive away from our new place. Well worth it though because she doesn’t believe in overmedicating. I say this after the last doctor prescribed 8 different medication) and told her about the effects of the Demezan. She said we need to stop giving her both of the syrups and she will likely have the same reaction to any cough syrup or bronchodilator syrup. Instead she prescribed the Huff Puff and a pump. We got it yesterday and it was a bit of a mission to give it to her. She didn’t mind having the mouth piece on her face strangely enough but as soon as I pressed the pump she freaked out. We had to hold her down to make sure she breathed it in. Not fun. The same thing happened this morning but the lunch time pump went much better. I hate giving her meds by force. I feel like it sets the tone for every dose that comes after that. My method is to use a stern voice to snap her out of her spiralling hysteria and once she’s calmer I keep talking to her and explaining what I’m doing…and I have no qualms with jelly tot bribery either.

The Huff Puff has worked wonders already. She’s looking and acting much better. The cough will take a while to go as it always does but I’m glad she’s not bouncing off the walls and I’m not stressing that she’s going to have a heart attack.

One thought on “Huff and Puff and Blow the house down!”